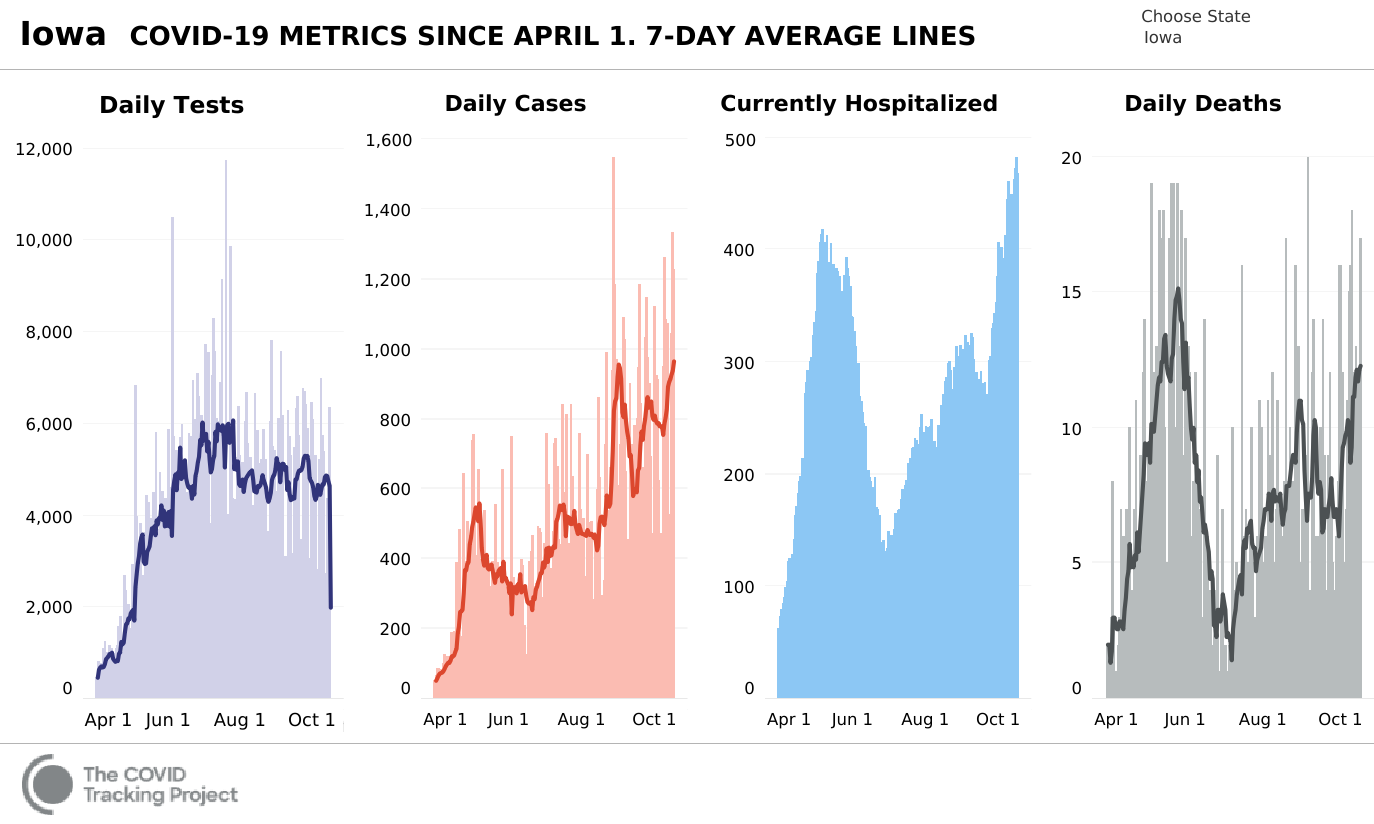 MADISON, Wis. (AP) — Rising coronavirus cases in key presidential battleground states a little more than two weeks before Election Day are the latest worry for election officials and voters fearing chaos or exposure to the virus at polling places despite months of planning.

The prospect of poll workers backing out at the last minute because they are infected, quarantined or scared of getting sick has local election officials in Midwest states such as Iowa and Wisconsin opening more early voting locations, recruiting backup workers and encouraging voters to plan for long lines and other inconveniences.

Confirmed virus cases and deaths are on the rise in the swing states of Iowa, Michigan, Minnesota, Pennsylvania, Ohio and Wisconsin.

Wisconsin broke records this week for new coronavirus cases, deaths and hospitalizations, leading to the opening of a field hospital to handle COVID-19 patients. Gov. Tony Evers said he plans to activate the Wisconsin National Guard to fill any staffing shortages at election sites.

While holding a competitive presidential election during a pandemic is “tricky business,” the governor said, “People are ready to have this election over, and I think it will be a successful election with very few hiccups.”

In Iowa, Scott County Auditor Roxanna Moritz opened additional early voting sites in and around Davenport, the state’s third-largest city, to try to reduce the number of people casting ballots on Election Day and to keep the virus from spreading in large precincts.

“We have to remember that there is this thing called COVID,” Moritz said. “Our numbers aren’t getting any better. The more people I can get to early vote, the better.”

The pandemic’s recent trajectory close to home has some voters reconsidering a lifetime habit of entering a voting booth on Election Day.

Tim Tompkins, a welding engineer in Iowa, took the day off work to cast an early ballot at the Bettendorf Community Center. Tompkins, 62, said he and his wife, Pat, were afraid of coronavirus exposure in Election Day crowds but determined to vote, so they brought their own sanitizer to the community center Friday.

“We’d go through a vat of boiling COVID to get the current president out of office,” Tompkins said.

In some states, voting early still has carried health risks. Voters in Georgia, Texas and elsewhere encountered hours-long lines that required congregating with hundreds of other people this week. In Georgia, nearly a quarter of the workers in a warehouse where Fulton County’s election supplies are kept and voting equipment is readied tested positive for COVID-19.

Voters in several Midwest states contested by U.S. President Donald Trump and his Democratic challenger, former Vice President Joe Biden, encountered lines when they went to cast early ballots on Friday. Some described the decision to vote this year as one that required deliberation and even courage.

Robert Baccus, 52, an independent contractor from Columbus, Ohio, was among hundreds in line at the Franklin County Board of Elections early voting center. He said he doesn’t trust voting by mail, so early voting was his best option for casting a ballot while trying to safeguard his health.

“It’s a choice between life and death, really,” said Baccus, a supporter of Democratic nominee Joe Biden. “We could not do it and our votes won’t be counted. It’s a choice I’ve got to make for my children and grandchildren.”

Vickie Howard-Penn, 50, a TSA worker from Columbus, said it was obvious Friday that the record virus cases Ohio reported this week had not deterred fellow voters.

“Did you see the lines? There are three lines trying to get up this way,” Howard-Penn said outside the Franklin County election board. She also planned to vote for Biden.

At some polling places, workers wore masks, gloves and face shields. Lines and voting stations were set up six feet apart and the stations and pens were sanitized between users.

However, poll workers are not required to wear masks everywhere. In Kansas, the secretary of state’s office did not make masks mandatory at the polls, drawing objections from some voters, particularly older ones.

Wisconsin held its presidential primary early in the pandemic after Democratic attempts to delay the April voting were thwarted. Voters waited in long lines in Milwaukee and elsewhere because a worker shortage meant there were fewer polling places.

Several election officials said they were confident they would have enough poll workers, sanitation supplies and protective gear to ensure Election Day goes smoothly and safely. But they are also encouraging voters to cast their ballots early, if they can.

“Our clerks and communities have learned a lot since the April election,” Waukesha County Clerk Meg Wartman said. “Our community members, our voters, are a lot more confident about how they can be out (safely)….I wouldn’t want people to be afraid to go to the polls because I think we’re better prepared.”

Wisconsin voter Jon Gausewitz, 37, still plans to vote in person on Election Day. He said that could change if the virus situation worsens where he lives outside Madison, the state capital.

“I’m just watching the numbers and rates and hospitalizations, that sort of thing, to see where we’re at,” Gausewitz said. “I’m still feeling pretty safe about it.”

Republican Secretary of State Frank LaRose updated a 61-point health and safety plan in late September that provides boards with detailed guidance on sanitation, use of personal protective gear, social distancing and other measures.

Anxiety among older Ohio voters may have helped drive the huge turnout at an online AARP-sponsored town hall with the secretary of state this week. More than 15,000 people dialed in, peppering the elections chief with technical questions about voting by mail.

As reassurance, LaRose provided his personal email address to participants and urged them to write with questions. Elections officials are preparing lists of reserve poll workers who are willing to be called on at the last minute.

Minnesota election officials have recruited all 30,000 poll workers they believe are needed to run the general election. They have cross-trained numerous others, including county and city workers, as reserves in case they’re needed, Risikat Adesaogun, a spokeswoman for Minnesota Secretary of State Steve Simon, said.

Officials in the battleground states reported no plans to close polling places, even if virus cases continue to spike.

“Obviously, we would try to open as many polling places as possible,” Nick Custodio, a deputy commissioner for Philadelphia’s election office, said. “We don’t want to close polling places unless that is what is advised.”